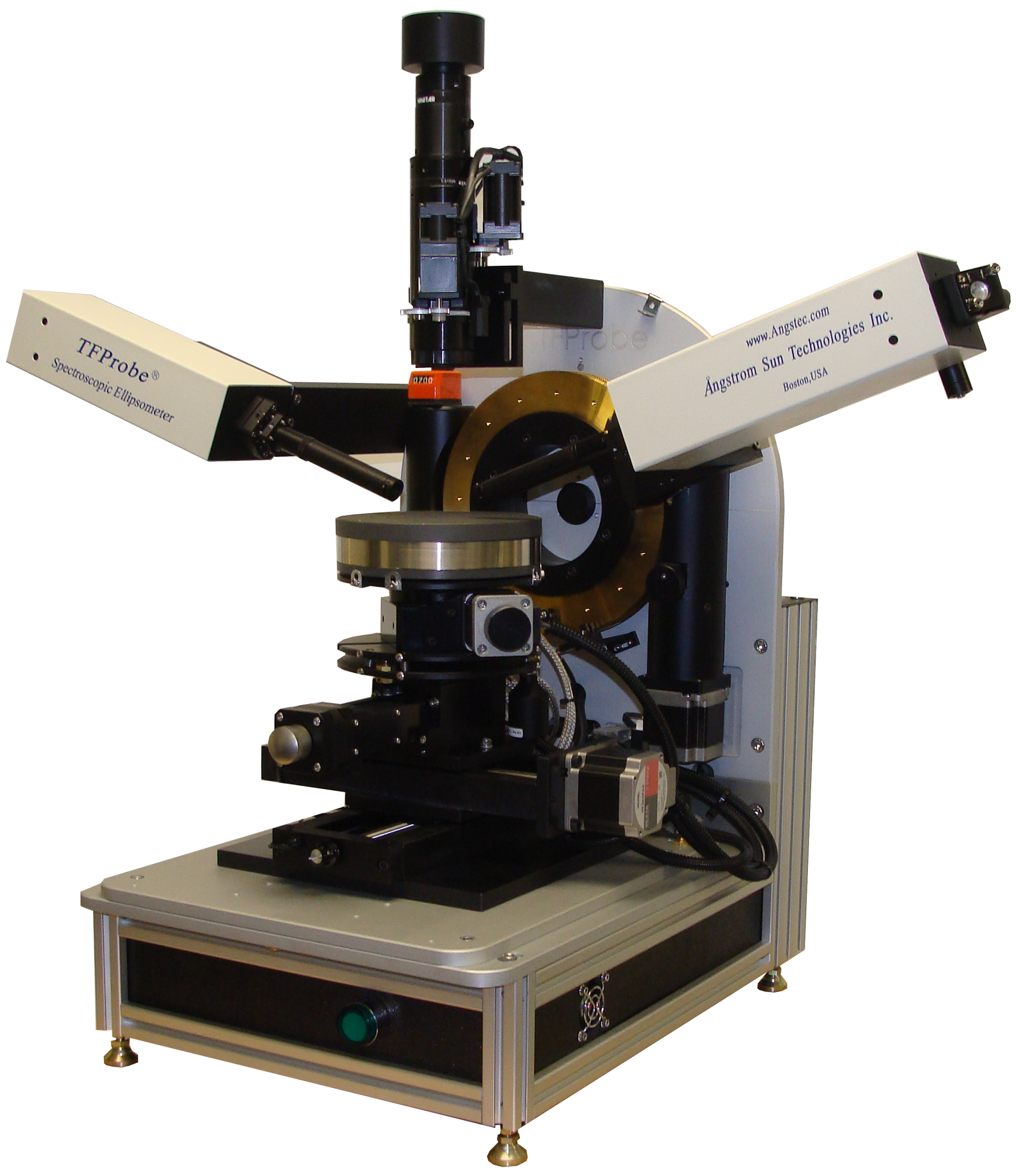 Spectroscopic Ellipsometer SE series are advanced models built by Angstrom Sun Technologies Inc. Ellipsometry is a technique utilizing polarization state changes after light beam reacts with probing samples. A typical ellipsometer setup includes a light source, polarizing optics (like polarizer, analyzer, phase retarder or called as compensator), sample stage, detecting unit, incident angle change mechanism, computer and software for data acquisition and modeling. Not like reflectometer, ellipsometer parameters (Psi and Del) are always obtained at non normal incident angles. By varying incident angle. many more data sets can be obtained which will be helpful in refining model, reducing uncertainty and improving user's confidence on model's output. Therefore, variable angle ellipsometer is far more powerful than fixed angle ellipsometers. Furthermore, by utilizing broadband light source, spectroscopic data over a wavelength range with many wavelength points can be obtained and thus measurement precision and accuracy for optical properties can be greatly improved. The measurement speed for spectroscopic data has been overcome by implementing an advanced detector array so thousands of data can be acquired simultaneously. With such configuration and capable of collecting more data sets, the complicated layer stacks could be analyzed with powerful functions built within software.

There are two ways to change incident angles, manually or automatically. Angstrom Sun technologies Inc designed both angle adjustment models, manually adjusting angle by moving arms at 5-degree interval following precisely preset slots (manual goniometer, SExxxBM, low cost version), and motorized precision goniometer with 0.001-degree resolution (SExxxBA). In addition, goniometers are setup at vertical layout so samples could be placed horizontally, which is safer when handling samples. With reliable and enough raw data sets, many film properties, like film thickness, its optical constants, interface, porosity and even composition can be obtained through modeling. In this sense, advanced software is a must for high performance SE tools. We developed TFProbe 3.X version software for system setup. simulation, measurement, analysis, data management and 2D/3D graphics presentation. It is all-in-one. 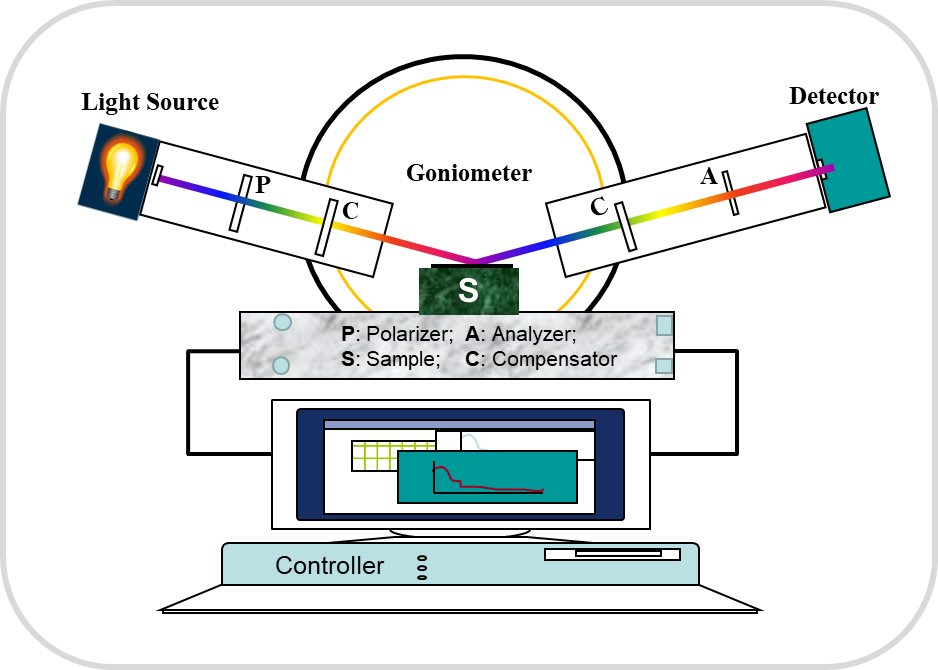 Hardware configuration for spectroscopic ellipsometer is application oriented and it is not necessary to “overload” by inquiring all available options. Polarization states are generated or modulated by polarizer, compensator, and then reflected with changes after sample under measuring, finally analyzed by an analyzer before reaching detector. Interpretation on signal, a set of ellipsometry parameters Psi and Del will be output and recorded.

However, ellipsometry is an indirect technique and quantities under interest (thickness, optical properties etc.) can only be obtained through modeling.

By building a model to calculate a set of ellipsometry parameters and then compared to experimentally obtained ones. The difference between two sets of values is minimized by varying variables defined in the model by Levenberg–Marquardt algorithm. 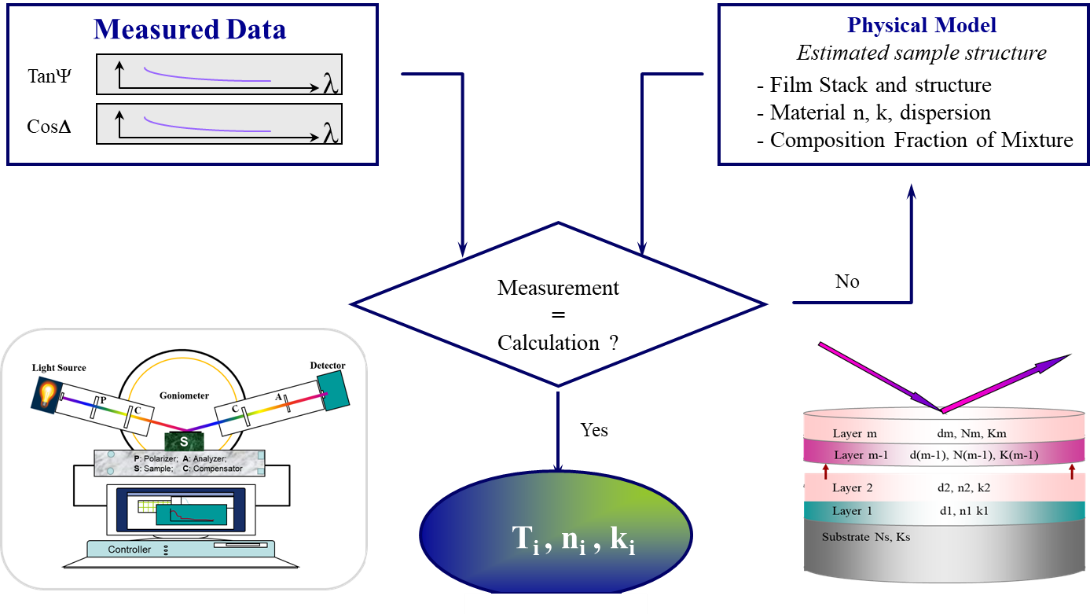 Here n is total wavelength points and m is variables in model. A certain experience in modeling is required to use such tool and therefore application support for initial use or learning is essential step.